The Festival of Pacific Arts & Culture (FESTPAC) is the world’s largest celebration of indigenous Pacific Islanders, drawing artists, cultural practitioners, scholars and officials from member nations of the Pacific Community (SPC). FESTPAC is held every four years in a different Pacific Island nation.

For more than 40 years, The Festival of Pacific Arts and Culture has been an important venue for the perpetuation of Pacific arts and cultures. It has developed into a strong entity in which cultural sharing and learning from differences has enhanced our appreciation and knowledge of the region. The goals of the Festival were developed in 1975 and have remained the driving force of the event

The Council of Pacific Arts and Culture

The South Pacific Arts Festival Council, as the Council was initially named, was established at a meeting organised by SPC in Noumea in 1975. Its main objectives were to ensure the Festival would become a permanent event; to provide the SPC Conference with information about the Festival and advice with respect to cultural affairs of the region.

The Council ensures the continuity of the Festival of Pacific Arts on a 4-yearly basis and sets the mandate for cultural development in the Pacific Islands and territories as per its objectives. 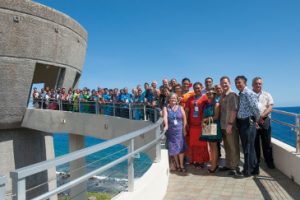 Hawaiʻi is honored to host this dynamic showcase of Oceanic arts and culture from June 10 – 21, 2020.

FESTPAC-Hawaiʻi 2020 will feature live performances, cultural workshops, hands-on demonstrations, film, storytelling and more, exemplifying the diversity of traditional and contemporary arts and culture across Oceania. The event will also underscore the urgent issues Pacific Islanders face – from  rising sea levels and the death of coral reefs to widening social inequality – as a way to illuminate our path toward the future.